What is science saying about sleep apnea?

Sleep apnea is one of the most difficult illnesses to treat. The illness is characterised by pauses in breathing during sleep. Initial symptoms include excessive daytime sleepiness, fatigue and nod-ding; as well as a number of other symptoms and secondary illnesses.

The pauses in breathing lead to a reduced supply of oxygen and consequently, repeated ‘wake up’ signals by the brain. These ‘wake up’ signals don’t result in waking up directly; but rather, in increased body functions like a rapid pulse and raised blood pressure. The result is a non-restora-tive sleep, which usually leads to excessive daytime sleepiness. 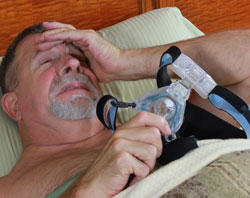 The abnormal respiratory pauses last longer than 10 seconds and result in decreased oxygen content in the blood. This leads to a lack of oxygen being supplied to the tissues; and it is this that results in the waking reaction which restarts the breathing. Through all this, the structure of sleep is massively disrupted and the body’s attempt at regeneration is dramatically impaired. Snorers with severe daytime sleepiness would raise a strong suspicion that they are experiencing interruptions in breathing during sleep.

When sleep apnea is untreated, chronic health disorders often occur (e.g. high blood pressure, heart attack, strokes, etc.). If sleep apnea is suspected, the response is to advise a sleep assessment. Through analysis of a person’s sleep, it is then determined whether the breathing interruptions are significant enough to warrant treatment.

Science has for decades been dealing with the diagnosis and clinical picture of sleep apnea. What has been added to this now, for the first time, is the inclusion of external factors and environ-mental influences, such as electronic pollution in the bedroom. Although the advocates of this theory are still far outnumbered, the issues are gradually being taken more seriously.

GEOVITAL Academy has, in recent years, been supporting many patients who have manifested complaints related to sleep apnea. For many years, these patients have been using CPAP* devices for respiratory support–a necessary evil for users, as well as for their partners. Interestingly, all bedroom radiation assessments of sleep apnea sufferers revealed increased electronic pollution exposure due to power lines and internal electrical wiring— the bedroom walls were strongly exposing the bed area to radiation.

After the implementation of circuit cut-off switches and/or shielding, two-thirds of all patients with sleep apnea were able to do without their CPAP devices; pauses in breathing had completely disappeared!

*CPAP is an acronym for Continuous Positive Airway Pressure; a device that provides a fixed amount of pressurised air and is used for the treatment of obstructive sleep apnea, sleep disordered breathing and snoring.

Leonard has been working with me this year to make, primarily, my sleeping area a tolerable space for me to be as I have fibromyalgia and various chronic pain syndromes and my increasing electro-sensitivity was preventing me from gaining the replenishing quality of sleep that would help keep my symptoms under better control. Following the initial survey, the steps he recommended (which included mats under the bed and a circuit cut-off switch) so vastly altered our sleep environment that even my … END_OF_DOCUMENT_TOKEN_TO_BE_REPLACED

Seven years ago at age 70 I moved into a ground floor apartment in a lovely converted old house. I had a survey done and knew that there was underground water present but no likelihood of flooding. This was important as there was an access to a cellar under the property which was open to the elements. Between ages 60 to 70 I had not needed to see a doctor as I was working full time in the movement profession teaching 18 Pilates classes a week and monitoring the health and fitness of 250 pup… END_OF_DOCUMENT_TOKEN_TO_BE_REPLACED

We are so glad to have had our Home Health Assessment. Jeremy was very good at explaining what everything meant and very impressive with his skills. It feels very different sleeping with the electrical circuits off at night. Peaceful and restorative. It was fascinating to see where the optimal positions were for sleeping. The children have stopped having accidents in their beds and have slept through most nights. We are renting at the moment but for us a Geovital Home Health Assessment will be a… END_OF_DOCUMENT_TOKEN_TO_BE_REPLACED