Ethernet over power line (EOP) is getting the internet from your power points. It is often promoted as an alternative to classical wi-fi. Is there also a ‘health’ difference?

EOP or Powerline (also called PowerLAN) is no longer a new technology but it is still relatively unknown compared to the wi-fi wireless standard. At the time that EOP/Powerline was introduced, it battled with many teething problems such as instability and speed. This situation has now changed significantly. Speeds of more than 100 Mbps are possible and stability is usually no longer an issue.

As with radio, man had no initial concerns about radiation and with Powerline, probably even less  because it’s ‘wired’ and thus assumed to be free of radiation. But what are the facts?

In the field, our geobiologists now bump into Powerline more often; this is internet coming from the power points. The assumption that it is radiation-free was usually made by our client/patient for the reason mentioned earlier. However, as part of the geobiological home investigation, the exposure levels to electromagnetic field radiation (EMR) in the living area and bedroom are recorded, and despite attempts to fix the high-frequency stressors in the examined spaces, it is not possible to locate the source of the radiation when Powerline is in place. Building biological measurement results show higher levels of high frequency waves inside the home compared with outside the home. An SSID (Service Set Identifier) of an existing wireless network is also not visible. All microvolt loads of EMF disappear after certain electrical circuits are shut down in the circuit breaker box/fuse box. The same thing happens to a wireless signal from a router when the power to the applicable power outlet is switched off. A quick check around the phone socket then gives us the answer to the situation—a Powerline adapter is plugged-in.

A brief overview of how EOP/Powerline functions

There are various technical terms for Ethernet over power line such as EOP, PowerLAN, Powerline, dLAN or PLC. With this technology, existing electrical wires are used to transfer data for an internal network (LAN) and Internet. Technically, Powerline makes a carrier frequency system which is implemented by means of plug-in adapters; of these adapters, there are always at least two pieces—a transmitter and a receiver. 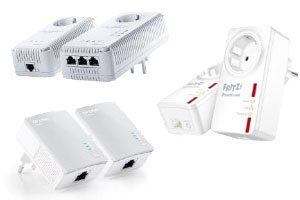 The transmitting adapter is connected via Ethernet cable to your Internet modem and/or network router and plugged into the power point. The PowerLAN transmitter adapter modulates the data signal in the high frequency range onto the electrical wiring and this is again demodulated by the receiving adapter. The main advantage is that no additional wiring is necessary, and also a higher speed of several 100 Mbps can be achieved. Up to 300 metres of cable can be supported with PowerLAN.

Effects of EOP/Powerline technology on people and health

If you choose a LAN and Internet network via Powerline, you are installing an internal network of permanent high-frequency radiation transmitters. Each electrical wire in the building is turned into a radio transmitter due to the high-frequency transmission going through it. To make this even clearer, when you look out of your window, can you see a cell phone transmission tower on a pole or roof? This is just one. With active Powerline, you have several of these in every room because each electrical wire is transformed into a radio transmitter.

Other technologies in the house can immediately refuse to work if they use the same frequency band. Amateur radio operators ‘curse’  this technology as PowerLAN turns out to be a massively disruptive signal on virtually all short wave bands, and it can even be installed in neighbouring homes to create this affect. The neighbours are affected by the installation, whether this is a separate single-family home or an adjoining apartment. And what about our health? Powerline/EOP intensifies the effects of radiation on humans significantly. Everywhere, in every room electrical wiring traveling through the walls with junction boxes spreading a web of wires. Without electricity, practically nothing works anymore. The electrical wiring itself already produces a substantial health burden of electricity from the 50 Hz AC which has a reach of 2 m into the room (220-240 volt house current). With PowerLAN now we receive an added continuous high-frequency load, which again undermines the entire electro-biology of people. Especially with regard to the ‘need for a regenerative sleep’, another killer factor is added against this very important function of physical regeneration. 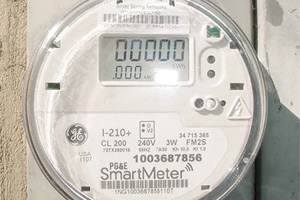 Powerline and smart meters—they affect us all!

You could say it is ‘luck’ that most people see Powerline only as an alternative to WLAN/wi-fi. Powerline is only used when a WLAN system is not possible. WLAN is significantly weaker in terms of radiation than, for example, cell phones or mobile Internet. It can happen that there are areas in a home with poor wireless reception due to wall construction. Since the power cables are physically placed in the walls, this reception problem is theoretically solved with EOP/Powerline. Unfortunately though, the reception problem is replaced with a dramatically higher, high frequency load in the entire house or apartment.

If, however, the smart electricity and district heating meters (i.e. smart meters) are legally forced upon us, we can expect another avalanche of problems. Depending on its technical execution, the smart meter sends consumption data via mobile Internet, Powerline or via the existing DSL or CABLE alternative.

Based on unique studies, which have been confirmed by the High Court as legally valid,  transmission via wireless networks is a questionable practice with regard to health effects. The same also applies to high-frequency data transmission over power lines. In the beginning, the providers often choose which transmission technology is offered to customers in terms of electricity and district heating services, but ultimately the customer can choose which equipment is installed.

What can I do? How can I protect myself?

By utilising circuit cut-off switches and technical shielding, one should be able to address these issues by effectively creating a Faraday cage effect. Reacquiring the ability to regenerate in the bedroom after protective measures are put in place is very likely achievable. However the quality of products used, as well as the approach, must get better each year as the health burden of radiation exposure continues to increase exponentially. And also, with the possible legalisation of the introduction of smart meters, the art of radiation protection must move forward.

A geobiological home investigation includes consultation about the results found that affect your health and how to best address these. You can read more about this in the following links, or call your local GEOVITAL office for more  information.

About the Author: Allen Cheney

Since primary school and playing with iron filings and electric field experiments, Allen has been interested in the effects of radiation on people. Allen is a Geobiologist in NSW, Australia and travels nation-wide.

Leonard has been working with me this year to make, primarily, my sleeping area a tolerable space for me to be as I have fibromyalgia and various chronic pain syndromes and my increasing electro-sensitivity was preventing me from gaining the replenishing quality of sleep that would help keep my symptoms under better control. Following the initial survey, the steps he recommended (which included mats under the bed and a circuit cut-off switch) so vastly altered our sleep environment that even my … END_OF_DOCUMENT_TOKEN_TO_BE_REPLACED

Seven years ago at age 70 I moved into a ground floor apartment in a lovely converted old house. I had a survey done and knew that there was underground water present but no likelihood of flooding. This was important as there was an access to a cellar under the property which was open to the elements. Between ages 60 to 70 I had not needed to see a doctor as I was working full time in the movement profession teaching 18 Pilates classes a week and monitoring the health and fitness of 250 pup… END_OF_DOCUMENT_TOKEN_TO_BE_REPLACED

We are so glad to have had our Home Health Assessment. Jeremy was very good at explaining what everything meant and very impressive with his skills. It feels very different sleeping with the electrical circuits off at night. Peaceful and restorative. It was fascinating to see where the optimal positions were for sleeping. The children have stopped having accidents in their beds and have slept through most nights. We are renting at the moment but for us a Geovital Home Health Assessment will be a… END_OF_DOCUMENT_TOKEN_TO_BE_REPLACED