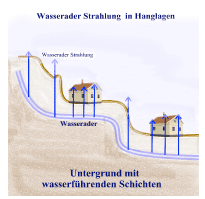 The concept of a water vein

As water passes through underground water channels, an energy surplus or energy loss results, which leads to ionisation. Ionisation is also increased due to the presence of salts and trace elements in the soil (iron, zinc, copper etc.) which dissolve into the water. This is referred to as radiation and it can be measured by means of a divining rod.

Water veins are beneficial and important. They supply the soil and plants with nutrients. Without water veins, nothing would grow. To get an idea of how much water must be present in the soil, one could contemplate that the average-sized tree requires about 100 to 150 litres of water per day. Water is collected by the tree’s roots and evaporates through the leaves and needles.

However, if the ionisation is too high, it acts as a pathogen which humans and animals will react to with equal sensitivity.

Leonard has been working with me this year to make, primarily, my sleeping area a tolerable space for me to be as I have fibromyalgia and various chronic pain syndromes and my increasing electro-sensitivity was preventing me from gaining the replenishing quality of sleep that would help keep my symptoms under better control. Following the initial survey, the steps he recommended (which included mats under the bed and a circuit cut-off switch) so vastly altered our sleep environment that even my … END_OF_DOCUMENT_TOKEN_TO_BE_REPLACED

Seven years ago at age 70 I moved into a ground floor apartment in a lovely converted old house. I had a survey done and knew that there was underground water present but no likelihood of flooding. This was important as there was an access to a cellar under the property which was open to the elements. Between ages 60 to 70 I had not needed to see a doctor as I was working full time in the movement profession teaching 18 Pilates classes a week and monitoring the health and fitness of 250 pup… END_OF_DOCUMENT_TOKEN_TO_BE_REPLACED

We are so glad to have had our Home Health Assessment. Jeremy was very good at explaining what everything meant and very impressive with his skills. It feels very different sleeping with the electrical circuits off at night. Peaceful and restorative. It was fascinating to see where the optimal positions were for sleeping. The children have stopped having accidents in their beds and have slept through most nights. We are renting at the moment but for us a Geovital Home Health Assessment will be a… END_OF_DOCUMENT_TOKEN_TO_BE_REPLACED