No rest and no sleep in retirement home

Previous Next
No rest and no sleep in retirement home 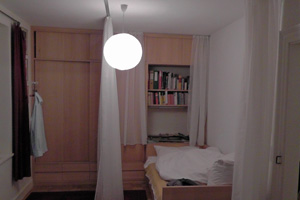 Shielding of a bedroom

Pastor H. was changing his residence to reduce his workload. He moved to the retirement home of the monastery in Lauterach. After the move and his first nights in the new room, it quickly became apparent, the problems he once had, had returned – quick action was needed!

For decades, Pastor H. had resided in and was very involved in the community of Sulzberg. Many years ago various problems started to appear which affected his sleep – pins and needles, tension, fatigue, exhaustion and restless nights. The Geovital Academy for Natural Health and Radiation Protection then helped to quickly and effectively restore normality in the life of Pastor H.

Now, after having moved to the retirement home in the monastery of Lauterach, all the same problems came back. The phone call to the Geovital Academy was made quickly and an urgent appointment was made for a geobiological assessment and bedroom makeover. The results of the analysis revealed a burden from ground mixing and a water vein. But alarmingly, the exposure to electric fields from the internal wiring (LF) and high frequency (HF) transmitters was unusually high. In most instances the levels found exceeded the measurable range of our measuring instruments. 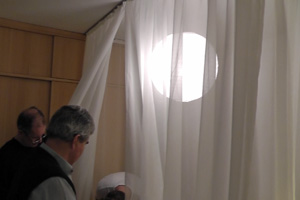 In Pastor H’s case a partition or canopy was made to address the technical issues, as the restructuring of the entire room would have been too costly. The added advantage is the way this will keep out mosquitoes in the summer. Active electric fields were removed by fitting a circuit cut-off switch in the fusebox and by painting the back wall with T98 Alpha shielding paint which was then grounded.

After the makeover, Paster H. once again found the desired restful sleep and vitality sufficient for the remaining ecclesiastical duties in the retirement home.

The geobiological investigation and remediation took place in late 2011.

Leonard has been working with me this year to make, primarily, my sleeping area a tolerable space for me to be as I have fibromyalgia and various chronic pain syndromes and my increasing electro-sensitivity was preventing me from gaining the replenishing quality of sleep that would help keep my symptoms under better control. Following the initial survey, the steps he recommended (which included mats under the bed and a circuit cut-off switch) so vastly altered our sleep environment that even my … END_OF_DOCUMENT_TOKEN_TO_BE_REPLACED

Seven years ago at age 70 I moved into a ground floor apartment in a lovely converted old house. I had a survey done and knew that there was underground water present but no likelihood of flooding. This was important as there was an access to a cellar under the property which was open to the elements. Between ages 60 to 70 I had not needed to see a doctor as I was working full time in the movement profession teaching 18 Pilates classes a week and monitoring the health and fitness of 250 pup… END_OF_DOCUMENT_TOKEN_TO_BE_REPLACED

We are so glad to have had our Home Health Assessment. Jeremy was very good at explaining what everything meant and very impressive with his skills. It feels very different sleeping with the electrical circuits off at night. Peaceful and restorative. It was fascinating to see where the optimal positions were for sleeping. The children have stopped having accidents in their beds and have slept through most nights. We are renting at the moment but for us a Geovital Home Health Assessment will be a… END_OF_DOCUMENT_TOKEN_TO_BE_REPLACED