In both the plant and animal world there are so-called radiation seekers and radiation avoiders. Radiation seekers are living creatures or plants that prefer geopathic stress zones. They need geopathic stress as badly as humans need sunlight and they prefer areas with excesses of natural radiation. Spices and medicinal herbs mostly grow on intensive radiation areas. Nettle can grow up to a height of one meter on areas exposed to underground water veins. 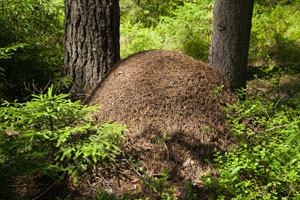 Also in animals there are species that prefer radiation exposed areas. Traditionally people say that cats seek out disturbed areas. The favorite place for a cat is often on top of a water vein.
The same goes for insects like ants and bees. Nature presents some wonderful examples of this, like swarms of mosquitoes circling over grid-line intersections. Even if they are driven away, minutes later they will return to circle in the same place. 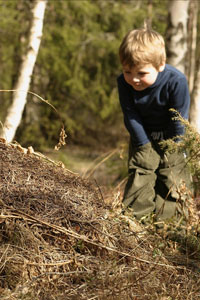 Entomologist explain this behavior by saying that the lines serve as a means of orientation for the ants. Beekeepers use the services of a diviner to find a nicely radiated spot (natural radiation) for the placement of their hives. This way they produce twice as much honey than if they moved the hive 2 meters away. The amazing thing is that these animals and plants don’t get ill because of it.

Medicine makes good use of the different properties of radiation-seeking plants. For example, Mistletoe (Loranthus) is used against cancer and high blood pressure, stinging nettle (Urtica) as renal agents, peppermint (Mentha) as stomach and bile agent and elderflower (Sambucus) as a sudorific (induces sweating).

Nature is often astonishing: what one thrives with, another will suffer by. Certain plants as well as humans, are radiation avoiders. Radiation avoiders will avoid disturbance areas as it deprives them of energy, causing cell and tissue changes and therefore they get sick. Plants cannot choose where they position themselves and so these influences become obvious by slanted growth and abnormalities in the plant.

The most significant influences of disturbances can be seen with tree cancer. Cancer bulges always indicate strong radiation exposure. Tree cancer is often formed due to strong water vein crossings, grid-line intersections and fault lines. Other phenomena which are specifically observed in trees and indicate a burdened location, are: slanted growth (evasion into a interference-free area), double root, twisting, the growth of mistletoe and ivy, shortened and twisted needles, adhesions or partial defoliation. 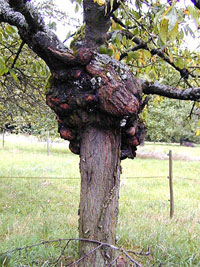 The radiation avoiders in plants include lime (Tilia), apple tree (Malus), beech (Fagus), birch (Betula), lilac (Syringa), azalea (Rhodondendron), Aster and primrose (Primula). An apple tree is so sensitive that its presence will already tell you there won’t be a crossing point of water veins. Sections of the branches will grow toward the unburdened areas and its pain can be seen by its evasive/slanted growth or cancerous ulcers.

Radiation avoiding animals include dogs, hares, storks and cows. The stork will only build its nest on chimneys of home that are in a ‘trouble-free’ area. If, due to tectonic movement, the area becomes burdened by geopathic stress, no stork will ever return to the already built nest. 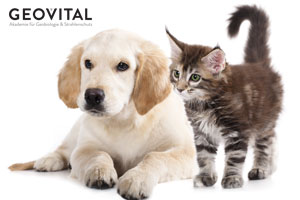 Cats and Dogs and examples of radiation seekers and avoiders

It is important to distinguish between:

In both cases, the following rule of thumb applies:

In the past, when people lived in huts and caves, the technical terms we now use for these issues did not exist. Man called these influences ‘evil spirits of the earth’ which led to ‘bad dreams’. What did man do in such events? – Man picked up his bundle of straw and moved to a different spot as often as needed to find a spot where he could sleep well. 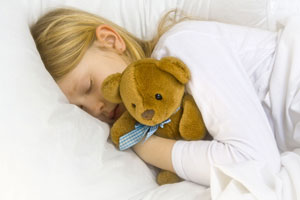 Children still display this behavior even today, by unconsciously moving around the cot or bed, or by asking mom and dad to rearrange their bedroom because they feel it is not right…

While many parents may scratch their heads and wonder how their daughter comes up with these curious ideas, it should be thought provoking that something is wrong in that room!

In modern times, the parents bed position stays where it is, in a place intended by the architect… a spot against the wall between two power point outlets. Due to this everything stays the same for many years and the harmful effects of radiation has sufficient time to harm those affected by it.

About the Author: Elke Ganser

Elke Ganser is Geovital's top female Geobiologist. Full of energy, interested and always helpful. Her motto: "I keep digging until I find the causes of the complaints of the patients..."

Leonard has been working with me this year to make, primarily, my sleeping area a tolerable space for me to be as I have fibromyalgia and various chronic pain syndromes and my increasing electro-sensitivity was preventing me from gaining the replenishing quality of sleep that would help keep my symptoms under better control. Following the initial survey, the steps he recommended (which included mats under the bed and a circuit cut-off switch) so vastly altered our sleep environment that even my … END_OF_DOCUMENT_TOKEN_TO_BE_REPLACED

Seven years ago at age 70 I moved into a ground floor apartment in a lovely converted old house. I had a survey done and knew that there was underground water present but no likelihood of flooding. This was important as there was an access to a cellar under the property which was open to the elements. Between ages 60 to 70 I had not needed to see a doctor as I was working full time in the movement profession teaching 18 Pilates classes a week and monitoring the health and fitness of 250 pup… END_OF_DOCUMENT_TOKEN_TO_BE_REPLACED

We are so glad to have had our Home Health Assessment. Jeremy was very good at explaining what everything meant and very impressive with his skills. It feels very different sleeping with the electrical circuits off at night. Peaceful and restorative. It was fascinating to see where the optimal positions were for sleeping. The children have stopped having accidents in their beds and have slept through most nights. We are renting at the moment but for us a Geovital Home Health Assessment will be a… END_OF_DOCUMENT_TOKEN_TO_BE_REPLACED