The story about the bank manager

Previous Next
The story about the bank manager

This headline would attract attention in any newspaper; as millions of people suffer from headaches, insomnia and stress. Thanks to the lack of resourcefulness of those affected, the sales of pharmaceutical companies are ever increasing and reaching astronomical proportions, as was recently shown in an issue of ‘Spiegel’. Patients are becoming increasingly unwell because the chemical substances in pills are truly not the miracle cure they were made out to be. 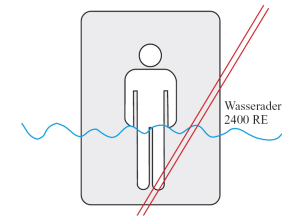 On a professional level, I had dealt with my bank manager for a long time. He offered me advice on financial matters and other bank technicalities, during which I always noticed his reddened eyes. One day the manager explained his health issues to me: chronic headaches of the worst kind and associated insomnia. I promised to pay him a visit with my assessment kit. As it turned out, there had been, in the past, a cancer case in the kids’ bedroom, which was situated directly beneath his own. There had been a canal (blue) running underneath the house and also a Curry line affecting the abdominal area of the sleepers. I guessed it was intestinal cancer. This made the banker think; especially since I could never have known that his mother-in-law, who had used this bedroom, had actually died from bowel cancer.

The same indications were present in the bedroom above where the manager slept. The bed of the man in this room was positioned a little bit more to the left and so the Curry line did not affect the bed area so much, but the electronic pollution situation here was grim. Due to the old home design from the 1970s, the AC electricity was reverberating back and forth through the building. Even if the electrical circuits of the first floor had been guarded by circuit cut-off switches, it would have produced no improvement, as the problem kept creeping up from the lower level.

Only after application of GPA shielding mesh to the floor and walls, along with T98 Alpha shielding paint, did the measurement values drop down to where they should be. Both kids’ beds were moved, and the master bedroom was protected by Geovital geopathic stress shielding mats.

Since then, the only place stress was found was in the bank.

Leonard has been working with me this year to make, primarily, my sleeping area a tolerable space for me to be as I have fibromyalgia and various chronic pain syndromes and my increasing electro-sensitivity was preventing me from gaining the replenishing quality of sleep that would help keep my symptoms under better control. Following the initial survey, the steps he recommended (which included mats under the bed and a circuit cut-off switch) so vastly altered our sleep environment that even my … END_OF_DOCUMENT_TOKEN_TO_BE_REPLACED

Seven years ago at age 70 I moved into a ground floor apartment in a lovely converted old house. I had a survey done and knew that there was underground water present but no likelihood of flooding. This was important as there was an access to a cellar under the property which was open to the elements. Between ages 60 to 70 I had not needed to see a doctor as I was working full time in the movement profession teaching 18 Pilates classes a week and monitoring the health and fitness of 250 pup… END_OF_DOCUMENT_TOKEN_TO_BE_REPLACED

We are so glad to have had our Home Health Assessment. Jeremy was very good at explaining what everything meant and very impressive with his skills. It feels very different sleeping with the electrical circuits off at night. Peaceful and restorative. It was fascinating to see where the optimal positions were for sleeping. The children have stopped having accidents in their beds and have slept through most nights. We are renting at the moment but for us a Geovital Home Health Assessment will be a… END_OF_DOCUMENT_TOKEN_TO_BE_REPLACED