Timber is a popular building material. It’s natural, stable, resilient and maintains the indoor climate. It is a building material that man has used for thousands of years to put a roof over his head and give a ‘homey’ feel to a house. People in mountainous and alpine regions especially, have always been taught to appreciate this natural building material which exudes a natural warmth on cold days and helps to keep the feet warm due to its poor thermal conductivity.

What is wrong with this building material?
Why would it be electrobiologically bad? 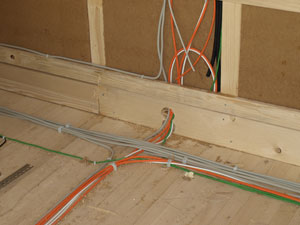 Electrical wiring and timber framing is a problem.

With the introduction of electrification in the 18th century, AC power entered apartments and houses. Initially it started slowly, as it was costly, but after the Second World War it became the standard in every home. The demand for electricity increased with society’s demands for comfort. After lighting, power was desired by housewives in the kitchen for cooking and the basement for laundry purposes. In the 60s, the era of consumer electronics began. TV and hi-fi systems found their way into nearly all homes and the first video players were developed. In the 80s, manufacturers of telephone equipment introduced more features and comforts such as the fax machine. In the 90s, designer lamps came along. Computers and electric garage doors were added in the 2000s.

Today a life without electricity is no longer conceivable. From electrically-controlled blinds to the front doorbell, from bath heating to the induction stove… everything works electrically.

As we now know, alternating current / electronic pollution is one of our biggest triggers for health problems. Humans are just not designed for this technology (see Radiation protection – Sense of nonsense?).

Basically, timber is a poor conductor. Timber behaves well as a building material but it is hygroscopic–timber tends to absorb water from the air in its surroundings. The higher the humidity in living spaces, the more moisture is in the timber. In general, the residual moisture in a living room of timber construction lies in the range of approximately 10 to 18 per cent.

Due to residual moisture, the AC electric fields are stored in timber beams and wood and cannot get away because it is not grounded. If a person is now positioned in the immediate vicinity, this person is the better exit point and is thus connected to these AC fields. A house made of concrete with grounded reinforcement would not cause this effect.

If the house is largely or completely made of timber, this ‘current transfer’ effect would be happening throughout the entire building! The people living in this house would be experiencing constant storms of current and massive doses of electronic pollution. 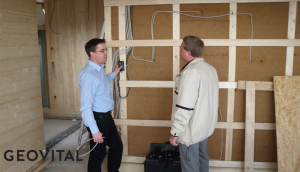 Thankfully, there are solutions! It would be unthinkable if we were no longer able to use beautiful timbers. Just as technology has evolved, so to has radiation protection.

Shielded cables minimise low frequency electromagnetic fields by 80 to 90%. In addition to this the correct placement of circuit cut-off switches may be needed to protect walls and flooring.

The ‘Alpha and Omega’ is however, correct planning; this is what determines whether success is achieved or not. It does not suffice to just read up on the subject and proceed with a ‘We’ll do that….’ attitude.  Without proper planning, you could sink a lot of money into the project and measurable results could be disappointing.

When you want to do it right, you need to engage a professional who will work with you and your architect to uncover the mistakes in the design. This way you will have a lot more enjoyment from your timber home and experience the great feeling of living life to the fullest.

If you have questions, please contact the Academy. Our staff will gladly put you in touch with a suitable Geobiologist or Building Biologist.

About the Author: Klaus Schwärzler

As Geobiologist and Building Biologist (IBN) Dip. Ing. (FH) Klaus Schwärzler has played an important role in the planning of many new buildings in his 18 year experience. He is not only familiar with the illness related side of patients, but knows the technical details and counter measures to create healthier living spaces and lives. His motto: “Only when one has experienced issues and implemented the improvements, do you know what you are talking about…”

Leonard has been working with me this year to make, primarily, my sleeping area a tolerable space for me to be as I have fibromyalgia and various chronic pain syndromes and my increasing electro-sensitivity was preventing me from gaining the replenishing quality of sleep that would help keep my symptoms under better control. Following the initial survey, the steps he recommended (which included mats under the bed and a circuit cut-off switch) so vastly altered our sleep environment that even my … END_OF_DOCUMENT_TOKEN_TO_BE_REPLACED

Seven years ago at age 70 I moved into a ground floor apartment in a lovely converted old house. I had a survey done and knew that there was underground water present but no likelihood of flooding. This was important as there was an access to a cellar under the property which was open to the elements. Between ages 60 to 70 I had not needed to see a doctor as I was working full time in the movement profession teaching 18 Pilates classes a week and monitoring the health and fitness of 250 pup… END_OF_DOCUMENT_TOKEN_TO_BE_REPLACED

We are so glad to have had our Home Health Assessment. Jeremy was very good at explaining what everything meant and very impressive with his skills. It feels very different sleeping with the electrical circuits off at night. Peaceful and restorative. It was fascinating to see where the optimal positions were for sleeping. The children have stopped having accidents in their beds and have slept through most nights. We are renting at the moment but for us a Geovital Home Health Assessment will be a… END_OF_DOCUMENT_TOKEN_TO_BE_REPLACED