Corinna K. would never have suspected the kinds of disturbances that had accumulated in her bedroom. Just like in a crime story, one measurement finding followed another. She was amazed; especially when she got the measurement instruments in her own hands, and could then experience the true extent of the disturbances that were there.

That radiation could be an issue with her, was not an entirely new concept in her family, because other family members had suffered with this. But that her body was riddled with pains, she was suffering from lack of energy, and major sleeping difficulties were so widespread; confirmed to me as a Geobiologist, that the wide range of issues were in urgent need of being understood and addressed. Everything that could occur in terms of radiation was present in her case. Not only grid lines and a water vein, but also the whole range of high- and low frequency radiation was present. 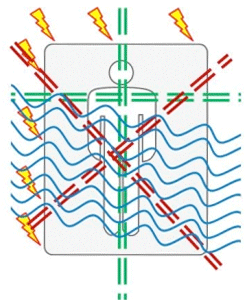 Sketch of the burdens revealed

Findings of the geobiological investigation

The image speaks volumes. The main aim was to help restore the young lady’s vitality. So, after determining the radiation present, we moved on to finding appropriate countermeasures. Her mattress with a spring core system was effectively the ‘perfect amplifier’ for high frequency radiation. This was especially so since the mobile phone transmission tower, which dominated the skyline of the town, was only 400 meters away. The mattress was replaced with one that was antistatic.

Two electrical circuits, which for the moment were turned off manually every night and reactivated when needed*, were affecting her in her bed. The position of the bed was so affected by excesses of natural radiation (blue–water vein, red–Curry lines, green–Hartmann lines, as well as a fault line) that she was determined not to spend another night in the same spot. Instead, she chose the only place in the room which was almost free of geopathic stress.

After the geobiological improvements

Even the first night was a great success. The inner uneasiness had dissipated and her exhaustion was gradually disappearing. She could now fall asleep normally and she felt refreshed in the morning. Her ordeal had finally come to an end. She now cheerfully looked forward to a pending move to a new apartment where she would be able to have her bedroom treated with appropriate solutions from Geovital.

Until then I wish her some peace and quiet, and that her batteries recharge once again.

* Geovital does not recommend this practice because there is the danger that in the case of an urgent need for electricity (e.g. a night time emergency), it will not be available until power is restored (i.e. by turning the circuits back on in the circuit breaker panel). We strongly
recommend the installation of circuit cut-off switches on the correct circuits. This will remove power when none is needed but instantly restore electricity to the circuit when an appliance or light switch is turned on.

About the Author: Rainer Scholz

Leonard has been working with me this year to make, primarily, my sleeping area a tolerable space for me to be as I have fibromyalgia and various chronic pain syndromes and my increasing electro-sensitivity was preventing me from gaining the replenishing quality of sleep that would help keep my symptoms under better control. Following the initial survey, the steps he recommended (which included mats under the bed and a circuit cut-off switch) so vastly altered our sleep environment that even my … END_OF_DOCUMENT_TOKEN_TO_BE_REPLACED

Seven years ago at age 70 I moved into a ground floor apartment in a lovely converted old house. I had a survey done and knew that there was underground water present but no likelihood of flooding. This was important as there was an access to a cellar under the property which was open to the elements. Between ages 60 to 70 I had not needed to see a doctor as I was working full time in the movement profession teaching 18 Pilates classes a week and monitoring the health and fitness of 250 pup… END_OF_DOCUMENT_TOKEN_TO_BE_REPLACED

We are so glad to have had our Home Health Assessment. Jeremy was very good at explaining what everything meant and very impressive with his skills. It feels very different sleeping with the electrical circuits off at night. Peaceful and restorative. It was fascinating to see where the optimal positions were for sleeping. The children have stopped having accidents in their beds and have slept through most nights. We are renting at the moment but for us a Geovital Home Health Assessment will be a… END_OF_DOCUMENT_TOKEN_TO_BE_REPLACED